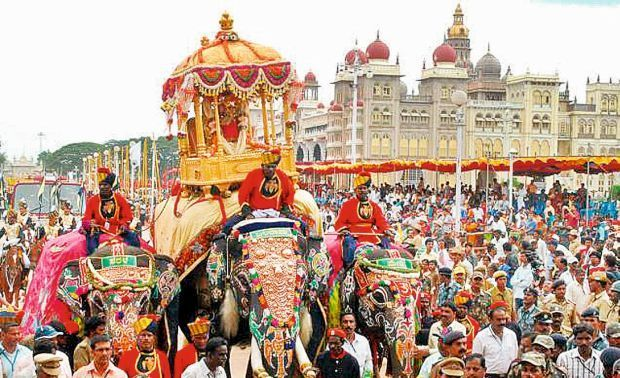 Mysore city in the state of Karnataka is a popular tourist attraction. Mysore’s 10-day Dasara festival is a grand spectacle that draws tourists from across the globe. However, besides the grandeur of its palatial Mysore palace, colourful gardens, wildlife and museums, this charming royal city has many intriguing facts that might surprise you.

Let’s take a peek at 11 such lesser-known facts about Mysore city!

1. Mysore City Is One Of The Foremost Planned Cities In India

The Wodeyars ruled Mysore for about 500 years. Being modern in outlook, the Kings of the Wodeyar dynasty brought about several new things for the development of Mysore.  Maharaja KrishnarajaWadiyar IV is credited to have started the process of planned development of Mysore way back in the early 1900s.

Today, Mysore is the second largest city in Karnataka after Bangalore which is loved for its good hygiene system owing to its well-planned development, which is an interesting facts about Mysore.

Mysore is the only place that manufactures the dark purple-tinged ink (marked on finger) predominantly used during elections time in India. The Mysore-based company, Indelible ink is the only company in India that is authorized to produce the indelible ink that is used in elections to prevent people from casting multiple votes.

Most of you might have witnessed the evolution of the internet and its penetration in India. However, not many of you might be aware of the fact that Mysore became the first wi-fi-enabled place in India in the year 2004 and the second in the world following Jerusalem.

A company by the name WifiyNet set up hotspots all across the city and covered the entire city of Mysore and its adjoining areas with wi-fi connectivity. Any person could avail of unlimited data transfer at a cost of INR 750 on a monthly basis.

4. The Original Edifice Of The Mysore Palace Was Burnt

Believe it or not, the present-day Mysore palace is not the monument that was originally constructed. In 1897, owing to a fire accident the original Amba Vilas palace was burnt down. This incident happened during the wedding of Princess Jayalakshammani. However, in order to maintain Mysore city’s royal glory, a bigger and better edifice was constructed at the same site.

A British architect Henry Irwin was given the task of reconstructing the palace and the construction was completed in 1912 at a cost of INR 42 lakh ( during that period).

The historic city of Mysore is also the birthplace of Ashtanga yoga. Ashtanga yoga Mysore is a dynamic form of yoga in Mysore where students engage in individualized, self-paced practice albeit in a group setting.

Although it was the Wodeyar royal, Shri Krishnaraja Wadiyar IV who patronised and promoted yoga during the early period, Ashtanga yoga is actually the brainchild of yoga guru K. Pattabhi Jois who founded the  Ashtanga Yoga Research Institute in 1948.

The name Mysore evolved from its original name- Mahishuru. As per the legend, the Mysore region was once ruled by the demon King by the name of Mahishasura. Goddess Chamundeshwari killed Mahishasura in order the protect the people of the place from his wrath. So, in honor of the Goddess, the Chamundeshwari temple was built atop the Chamundi hills which even today is a popular tourist attraction.

7. Advanced Artillery Was Developed During The 1700s In Mysore

In the 1780s, it was in Mysore that an iron casket rocket artillery and foremost metal cylinders were built. This advanced weaponry was created under the leadership of Hyder Ali and Tipu Sultan. These rockets were an advanced weapon system yet to be seen even by the Britishers.

Mysore Pak is a legendary sweet that simply gives a melt-in-the-mouth savory experience. This predominantly South Indian delicacy first originated from the royal kitchens of Mysore during the early part of the 20th century. Made out of pure ghee, Mysore Pak was subsequently designated as Mysore’s royal sweet.

9. The First City To Get The Underground Drainage System

Indian navy warships are the pride of the defence system of the country. Launched in 1993,Indian navy warships was named ‘INS Mysore’ after the city of Mysore. This warship is unique and one of its kind in the world. INS Mysore is a rare hybrid warship that houses a mix of Indian, Western and Russian weaponry in form of machinery and equipment.

This Delhi-class guided missile destroyer is still in active service with the Indian Navy.

Nevertheless, the stocks had to be utilised and hence the iconic Mysore sandal soap began to be made.

The city of Mysore not only has a rich cultural heritage but also figures high amongst the many firsts in terms of contemporary things this country has seen. Although most of us are aware of the rich legacy of the state, the lesser-known facts about Mysore mentioned in the aforementioned sections pave way for an in-depth view pertaining to other interesting aspects that this royal city stands witness to.